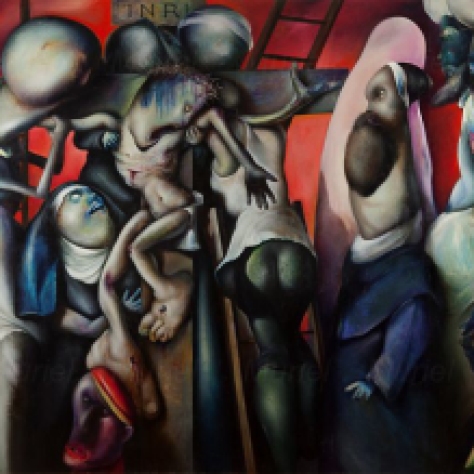 ‘As a painter I feel a special predilection for the human figure, because this is where the mystery of many things can be found’ – Angel Muriel

The Dali-esque work of Angel Muriel revolves around the duality of love/ death, elegantly revealing the futility of our existence with the artist’s wry sense of humour. Charged with simultaneous attraction and repulsion, these paintings swell out burlesques of constantly mutating figures. Buried in the rubble of tongues and teeth, fleshy mounds take on all the colours of a frog in a blender.
This is body tissue eroticism, a bold desecration of the spiritual nature. Caught up in dark scandals, there are glimpses of sideways glances, bulbous eyeballs and round-toothed grimaces. The works emphasise the fleeting nature of life with its impossibly shifting boundaries. Syrupy faces emerge from the smooth veneers, and are finally swallowed up by amorphous forms. Bubblegum blown heads bloom and float around like balloons wearing mutilated wattles and double chins. These oracles spout incomprehensible psychobabble, their marshmallow soft skin-tag spill over in fatty folds. Piles of voluptuous bodies are deformed with swollen ankles and withered arms, the spawn of a Modigliani and Bottero romance.
Uncomfortable to look at, but nonetheless mesmerising, Muriel’s unusual works are pure theatre. His hallucinogenic visions arise from assigning the psyche a physical form. The artist is a philosopher, questioning the meaning we attach to things through religion or superstition, arguing that everything eventually boils down to erotic ecstasy. These hairless human slow-worms ooze from every pore of the canvas, suffering their extreme Elephantitus. They writhe in an agony that Muriel believes only death will relieve, that simply hitting these strange ganglions with a Bible will not suddenly make them disappear.