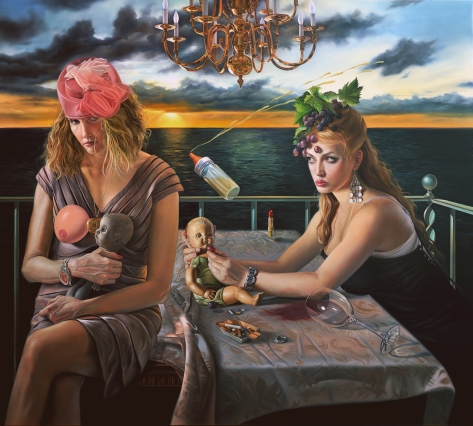 Human nature does not change! Our emotions, desires, hopes, and dreams are the same as our forefather’s. Throughout history, individuals have always been controlled by invisible strings that shape their reactions. People and places change, but human reactions to events are largely predictable. Collective human reactions then form a culture, which dictates acceptable patterns of behaviour. I have studied people’s reactions to these patterns of behaviour and the institutions that enforce them. I find that they range from docile acceptance to open rebellion. Most people create a mask of respectability that other members of society see. These masks might fool outside viewers and may even fool the individuals who create them. If you rip off the masks, the primal passions that control humans emerge from the deep recesses of our psyche. The desire for wealth, power, and sexual gratification has been with humans since the beginning. The complex relations between men and women have been with us in every culture and society. During the last half century; women have made great strides for equality in every field of endeavour. However, there will always be an underlying sexual tension between men and women.

My paintings reflect my observations of humanity and the never ending trials and tribulations we subject ourselves to. They are a tribute to the artists who went before me. In each age, these men and women have acted as observers and chroniclers of the human condition. As their work inspired me, I can only hope that my paintings will act as a guidepost to those who follow. 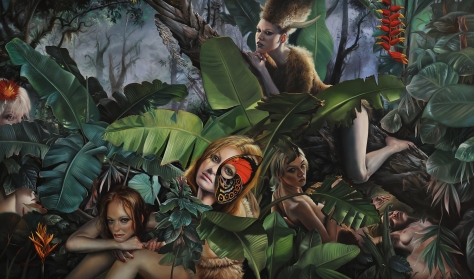 David Bowers, born 1956 in Chambersburg, Pennsylvania and graduated from art school in Pittsburgh 1979. He began working as a staff artist at various studios in the Pittsburgh, PA area. Two years later, David began teaching his craft at the Art Institute of Pittsburgh where he lectured for ten years and was honoured as the Keynote Speaker for the Class of 2003.

In 1991, David began his illustration career working mostly with book publishers in New York City in which he completed over one hundred book covers in the span of over ten years. Also, David’s work graced the cover of numerous prominent magazines, including TIME. He also painted the portrait of J. P. Morgan for the cover of Cigar Aficionado , as well as the family portrait of the Rothschild family and the Chateau Latour Winery for the covers of Wine Spectator magazines. These paintings are now part of the publishing company’s permanent collection at their corporate headquarters in NYC.

Bowers’s illustrations received numerous awards including three Joseph Morgan Henniger Awards, “Best of Show” from the Society of Illustrators of Los Angeles along with two Patrick Nagel awards. These awards recognized David with the best, published illustration of the year. Also, David received nine other medals recognizing his work from that organization. David also received numerous medals and Merit awards from the Society of Illustrators in New York, Spectrum and Communications Arts Magazine.

As David transitioned into Fine Art, his work continues to be recognized by various organizations including the “Best of Show” from the American Society of Traditional  Artists in 2014 and Best of Show from the International Guild of Realism, the “Jack Buncher Award” from the Carnegie Museum of Art in 2013, the “Best of Show” in 2011, “The Best Tromp L’oeil” in 2010 and “Pioneer in Realism” award in 2009 from the International Guild of Realism. David was recognized by The Art Renewal Center with the “Chairman’s Choice Award” in 2013 along with the “Staff Award” in 2011 and in 2009 recognized as a “Living Master.” David’s painting titled, “Made In America” received the 1st place award from The Portrait Society of America in 2011 & 2014. Bowers was a semi-finalist for the Outwin Boochever Portrait Competition in 2009, National Portrait Gallery, Smithsonian Institution.

Bowers has had exhibitions across America and Europe, including the Mendenhall Gallery in Pasadena, CA, Gallerie 224 in Laguna Beach, CA, Klaudia Marr Gallery in Santa Fe, New Mexico, 101 Exhibit in Miami, FL and Los Angeles, CA. Gallery Brusen in Denmark, Halcyon Gallery in London, England, Marcel Salome Gallery in The Netherlands and Germany, the Butler Institute of American Art, The Westmoreland Museum of American Art and is currently being represented by Palm Avenue Fine Art in Sarasota, FL, Gallery 126 in Denver,CO and The Winfield Gallery in Carmel, CA.

Upon first glance, Bowers’ works seems to take you back to periods of painting long gone. This is due to Bowers method of painting, which is reminiscent of the Old Masters, specifically the 17th Century Dutch. David has studied the masters for many years to develop his techniques, which involves multiple layers of paint called glazing and alla prima. The technique might be old, but his paintings incorporate modern themes and current symbolism, which he describes as “realism with an edge.”

Bowers’ paintings are in many private collections throughout the United States and Europe as well as The Museum of American Illustration in New York and the National Portrait Gallery in Washington, DC.

The personal online exhibition ‘Inner Observations’ of paintings by David Michael Bowers is held on the gallery website from the 2nd to 30th April 2020. Visit the exhibition at http://www.hayhill.com/docs/bowers.html